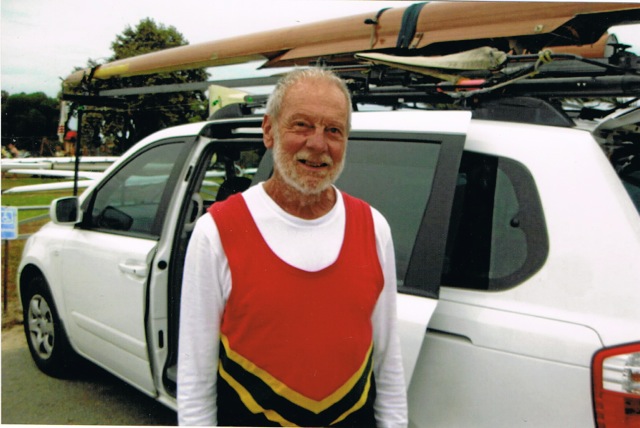 Bob recognised the great value and benefit derived from the feeling of well being that comes from being fit and healthy for racing. It was very much a way of life.

There is also the Life Membership of his beloved Club. Over 56 years, he fulfilled the positions of Captain, Secretary, Treasurer, Committee Man and laboured at building and boat maintenance, helping to build the Club from humble beginnings to the proud heritage of social and community benefit that it now presents.

At a later date, the Institute disbanded, forcing the renaming of the Club to Riverside Rowing Club Inc. Back in 1947 Bob's first Coach taught the old fashioned 1920's straight back body swing style. After two years of hard slogging in crews with minimal winning potential, he latched onto Douglas Fairburn's book "Chats on Rowing" started sculling and forever after was self coached and joined crews only in emergencies.

Over the years, Bob's trophy cupboards have overflowed with mounted trophies, pewter mugs, ceramic goblets, beer mugs, engraved drink glasses, cake trays, spoons and a collection of nearly four hundred medals. Three hundred of these medals have been gathered since 1980, when he switched to Veterans and Masters rowing. The major pride of possession happened in 1979, when at the age of 49 Bob became the oldest sculler to win a National Australian Championship in Lightweight double sculls with 34 year old Robert Booth of Mannum Rowing Club. In adding more credit to the win this double blitzed the field in a World Record Time of 6' 27.5 seconds. This record remained unsurpassed for a number of years until equipment improvements such as Cleaver blades and plastic boats became responsible for faster times.

Since 1980 Bob enjoyed lots of thrilling wins in all classes of boats, generally in composite masters crews when competing in Annual Masters Championships held throughout Australia.